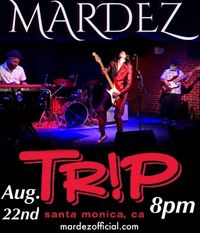 “Mardez is an original band formed in Austin, TX by guitarist, singer, and songwriter Mario Hernandez. Mardez’s music is heavily influenced by funk, rock n roll, and Latin rhythms that create a unique blend of percussive dance beats, energetic bass lines, soulful vocals, and powerful guitar solos. Having gained his performance chops playing Blues groups across Dallas, Texas, Mardez then moved to Austin to attend The University of Texas and play music professionally. Mardez acquired multiple residences in Austin and toured central Texas consistently through until the release of his debut single in 2019 with “Live on a Cloud”. Since going on to play countless shows all across America, Mardez has utilized his upbeat and energetic brand of Funk infused Rock ‘N’ Roll to the far reaches of the country he calls home. Now based in Los Angeles, he has released his debut full length album titled Been There Before on May 14th, 2021 with rave reviews from top music blogs and playlist curators. Mardez is breathing new life into an established and well-loved genre, and is proving himself to be one of the most hardworking emerging artists around.” -Underground Apex, Chicago, IL, 2021